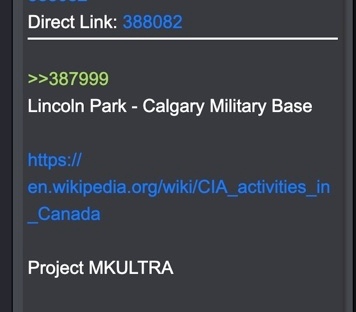 You’re most likely wondering why I am randomly bringing up the subject of MK Ultra in the midst of the most historical FREEDOM TRUCKER protest that has sparked interest globally and encouraged other countries to follow suit.

Today’s four year Delta is all about MK Ultra and the experiments that were done in MONTREAL, CANADA.

The MKUltra program also operated under the cryptonyms MKNAOMI and MKDELTA. The “MK” indicated that the project was sponsored by the Technical Services Staff of the CIA and “Ultra” was a nod to the codename that had been used for classified documents during World War II.

Between 1957 and 1964 (though possibly beginning as early as 1948), psychiatricexperiments were conducted at the Allan Memorial Institute in Montreal — a psychiatric teaching hospital affiliated with McGill University. Scottish-American psychiatrist Dr. Donald Ewen Cameron led and conducted these experiments. The program is widely believed to have been partly funded by the United States Central Intelligence Agency as part of their top-secret MKULTRA program. The Canadian government also funded the project. The experiments’ purpose was originally and officially listed as an effort to find a cure for schizophrenia. However, in reality, the project conducted illegal human experimentation to determine whether drugs and psychological techniques could be used for the purposes of mind control. Officially, neither the United States nor Canada has admitted to being responsible for the experiments. (See Canada and the United States.) Survivors have attempted to receive compensation with some success.

Considering Trudeau’s consistant robotic answers to the press and his deviant past crimes is it possible he is an MK Ultra subject? Considering he was born into the cabal bloodline and attended the Montreal located McGill University, where the experiments took place, the answer is clear.

1 thought on “The reality of Project MK Ultra, not a conspiracy theory, it’s a FACT.”